That time I traded romantic favors for money

This is my dating life in a nutshell:

The only girl who ever gave me her number without my solicitation was an 18-year-old who was wearing a Sesame Street hat and a pink tutu over her jeans. Though I was not interested, I decided to reward her for her moxy. I texted her.

She never texted me back.

And that's my dating life in a nutshell.

A couple weeks ago I got a text from my friend, Mancub.

I thought the charity was just to get me a date, but apparently it was some sort of canned food drive. All I know is that I was told to show up on a designated street corner dressed in fishnets and leather. Okay, that's not entirely true. We actually met at the Crossroads.

Before I got up to be sold, the computer crashed and my introductory video was lost. So Mancub, the MC, just interviewed me on stage.

He asked me to talk about myself. My mind went blank and all I said was: "I'm Tanner. I'm 23. I'm from Arizona.... that's it." The next question: "Can you do your favorite dance move?" To the horror of all those present, I could.

As I was putting the jig back in gigolo, the bidding began. "One can. Do I hear one can? Anybody? One can? Guys, it's for charity.... Charity suffereth long, and is kind... seeketh not her own. Somebody please!"

A girl raised her hand. Then another raised hers. The bidding took off. To my surprise, several attractive girls bid. Then to my greater surprise, my friend Livia, affectionately known as Voodoo Mama Juju, started bidding, AND THEN NEVER STOPPED.

Let me clarify something. Voodoo Mama Juju received her name after administering witchdoctor potions that almost killed me in an attempt to cure my cold. VMJ is like ten inches taller than me. She is going on a mission in a matter of weeks.  The chances of us dating are slimmer than Billy Graham dating Ozzy Osbourne. Yet, she continued placing bid after bid.

Each time she raised her hand I became more and more concerned. Girl after girl dropped out until it was only VMJ and one other girl left. From the stage my eyes shouted, "LIVIA! STOP THIS NONSENSE! THERE ARE NOT 2,100 CANS IN THE LAND OF REXBURG!" Apparently she didn't hear my eyes.

The one time in my life where girls were literally paying to go on a date with me, ended with me getting sold to a friend who did not want to win.

But Tanner, didn't you get to meet the girls who bid on you after the event? Nope. I had to leave right after my auction to get to the Comedy Brawl where I met a total of zero girls.

As I sat contemplating the grand irony of the situation, I got a text from none other than the Tutu Girl.

Posted by The Tanner and Bryan Experience at 5:22 PM

The Tanner and Bryan Experience 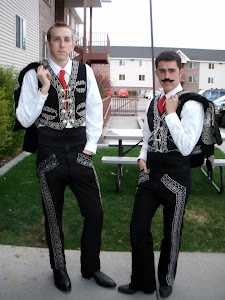